There's a bunch of updates on kronoslang.io. I've been experimenting with simple sequencer circuits in Veneer, which gives these sounds quite a retro vibe. Say cheese!

When making music, there's not always the time to build your instrument from scratch (no kidding). You can pull functions from other workspaces into your Veneer patch by using Project > Cloud > Use Packages, like I did for this piece of generative synthpop. 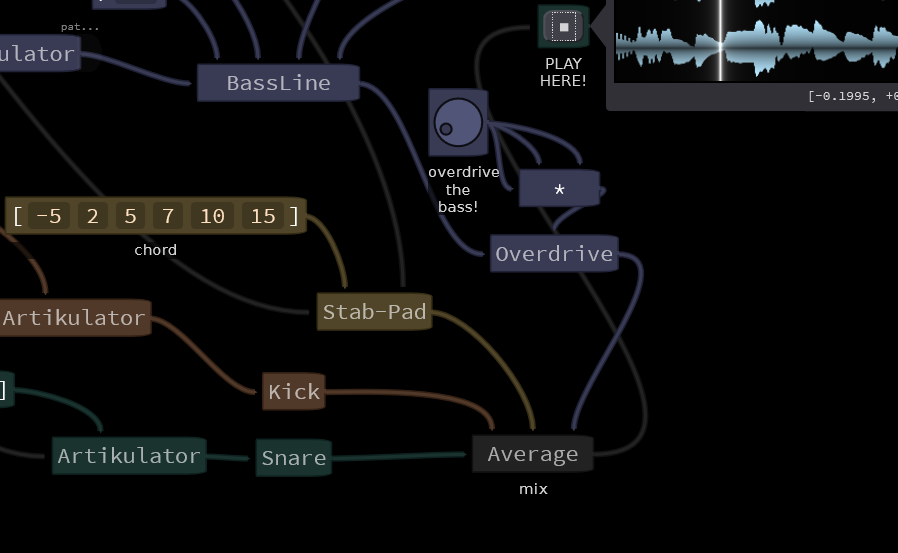 This piece makes use of [kronoslang/virtual-analog 0.2.1] and [kronoslang/gadgets 0.1.2] to provide your ears with some retro synth cheese goodness.

Would you prefer your cheese served on the command line? No worries! There's also an article on using the gadgets offline in the comfort of your REPL or text editor. This highlights sharing code between patcher and editor - Gadgets are implemented in Veneer, but you would never know it as you use them. Conversely, Veneer can pull in textual code as well, as long as it is on Github.

Black is the new Black

Anyone who has been patching for a while has occasionally suffered from the severe case of spaghettitis. Too many patch cords and the visualization no longer clarifies, rather the opposite! While you could always drop to the textual idiom for these pathological cases, there's a new feature in Veneer to provide some first aid.

There's now a fifth color - a timid dark gray - that fades into the background of the patch. Black cords are also automatically drawn behind those of any other color. This is handy for a value you need to connect to several places, like function inputs, constants and whatnot.